Our website sucked. We were averaging about 60,000 unique visitors to the main site per month. Other CEOs wondered why our site wasn’t mobile. Our CEO was embarrassed. A technology company that wasn’t mobile – what’s with that?

We needed to show our clients that we’re capable of doing mobile, that we are relevant in the age of mobile – and we needed to do it just that little bit better.

Setting himself up as the ultimate customer, Trevor Mather, our CEO at the time, asked Chris Murphy to fix it. And Chris then involved me, as I’d had a tremendous amount of experience off the back of successfully reinventing the ThoughtWorks Studios site – where we had invested heavily in inbound marketing, social media, search engine marketing – and generally, creating a place where great content lived.

The project was initiated 18 months ago, at a time when the website was undergoing heavy development for the Join recruitment website. It was clear from the beginning that we were starting from scratch in terms of the core building blocks of a website. We had limited SEO, a poor design, no content strategy – and around 20 microsites that had been created by ThoughtWorkers over the years. 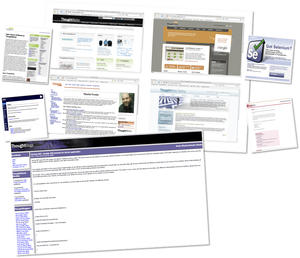 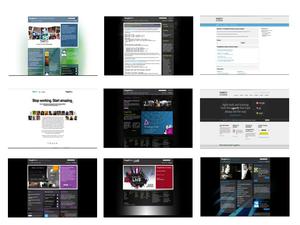 We saw an opportunity to align with the ThoughtWorks vision of bettering humanity through software, and helping drive the creation of a socially and economically just world – by creating a site that spoke to this, one that we are all proud of. We audaciously felt that we had some pretty awesome content to get out in the universe – and so, set ourselves a goal of becoming a place for top technology content. To become a site that we were proud of, and to be a place for top technology content – we first needed to merge all the microsites into one clean, cohesive site – this was one of our initial goals. We also needed to make our site responsive, in line with the recent work we’d been doing in the mobile space.

To kick things off, we convened a ThoughtWorks style inception in Manchester – which included the existing web team, the Studios digital marketers plus a number of stakeholders. We proceeded with capturing all the hopes and dreams for the new site.

We wanted to really nail down the goals for the site. And that went a little slower than we’d hoped… largely due to the fact that we wanted it to first be mobile AND we wanted to be exemplars of continuous delivery AND be excellent at experience design AND we didn’t want to use an off-the-shelf CMS. We wanted to use all of the state-of-the-art approaches.

Voltaire: “perfect is the enemy of good”.

We started work in September 2012 with the vision of doing it all, starting from scratch. In January 2013 the site was launched and we accomplished the goal of being responsive. However, we didn’t do the simplest things… and this was a huge mistake – we were trying to be perfect, and it really slowed us down. Despite getting the website responsive, we still needed to be more technically sound. We realised that if we going to do this the right way, we needed to refocus, and reprioritise.

There were a couple of goals that we had to fuse together – and we really needed a galvanizing goal. We exposed our Studios legacy CMS as a service to allow us to get publishing capability for the Insights section live – faster. This helped us prove out the business model. Proving that, in essence allowed us to jump start getting things to market faster…

However, because we took a short cut route to get things done again, we are now living (temporarily) with a bit of a frankenstein. In the second phase of bringing the Studios site to TW.com, we took on too much technical debt with the integration – and didn’t allow enough time for the web team to build a more elegant solution. This is not a place we want to stay in for too much longer, and we’re working on building out new tools and functionality as you read.

The real learnings have been around letting data show you the way on something – when we first started the project, we could have easily been paralysed on what to keep and what to start – we did a lot of analysis. Some of our microsites had only 30 viewers a year, so we made some bold choices to drop a lot of content. We also took a risk on resurfacing content elsewhere – we were precise about this and we got it done – eventually.

That was a huge lesson for the team – and we are still learning today. One of the biggest lessons for us was to demonstrate incremental value, frequently – rather than sending the team off in the dark to work on technical debt – we needed to chunk things off and deliver early, and often.

Once the site was integrated and live, we had a lot of myths to dispel. Many people thought that by removing the microsites, we’d destroy the majority of the traffic coming into the main site. Yet, some of the sites were lucky if they something beyond the realms of double digits for a year. We needed to soothe fears with analytics. Actually, we found that a lot of our traffic was generated by terms we owned – such as Mingle. We weren’t tracking well when it came to industry terms like ‘Agile project management’ or others where we had substantial mindshare. It was clear we needed to build this up, we cared about some words, and not about others so we establish a list of keywords – and used those to gauge our success.

August was the first month that saw Studios / TW.com integrate, and analytics across the whole suite. The results? We have had 115,000 unique visitors to our site in September and October. Given that we’re not a consumer site, these are really impressive stats. We have also added just over 300 articles in Insights across nine channels, and before the end of the year we will include webinars, ebooks and other useful resources.

Before the digital refresh, we were not tracking position/rank on any keywords. We now track 50, ranking in the top-3 for 7 of them, and have 16 in the first page of results.

And, there is more work yet to be done. We are currently integrating Join, rolling out the Spanish version to support Ecuador and Latin America, and revamping the design of the events page – we want to make it super easy for ThoughtWorkers to add in their events like GeekNights and such… exciting times ahead!