On her current project, Natalie has taken a room above a local bar and made a habit of stopping by at the end of the day. The bartender is her landlord and he’s become something of a friend. “What’s with the sad sacks sitting over in the corner?” she asks one evening. She is feeling good and the three decidedly unhappy souls in the corner booth are inconsistent with her mood.

The bartender slides a frosty mug towards her. “They’re my cousins. Each one of them takes care of a part of their father’s business. Things aren’t going well. Kind of sad really. If you can get one of them to smile, I’ll buy you another beer.” 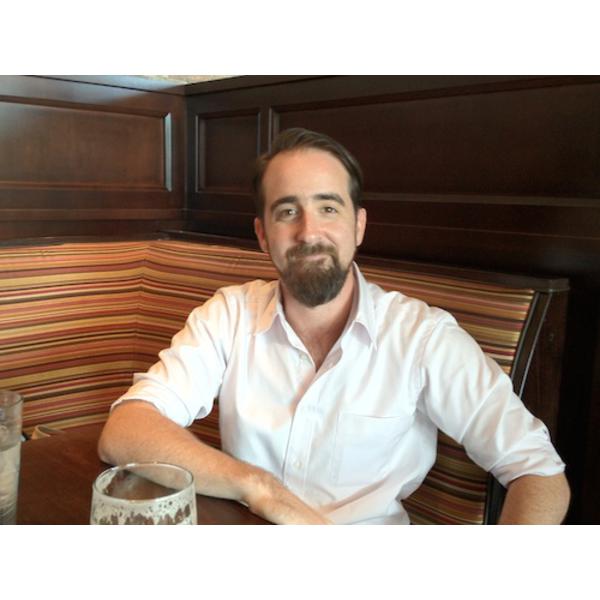 That is enough for Nat. She approaches the table and picks out the youngest man in the group. He is nervous and repeatedly glances over his shoulder. She plops down next to him. “Hey, I’m Nat. What’s with the eye twitch my friend?”

“Oh, you’d twitch too if you were in my situation. My father put me in charge of the most successful product in his business. Now I wake up everyday wondering what my competitors have done to outrun us.”

“You know,” she offers, as she thinks of the cold one waiting for her, “I’ve solved that kind of problem. There was this company in England, LastMinute.com, which was in the online travel business. It was a bitch; they had new competitors every week.”

The young man stared at her. “That sounds awful. What did you do?”

“They wanted to defend their position as a market leader, innovate their proven product faster and better than anyone else.”

The young man slumped. “Oh, I’ve tried that. It took forever, cost tons of money and in the end didn’t make much difference.”

“We made it our job to mine opportunity from uncertainty.”

Natalie takes a drink from her mug. “Yeah, that’s pretty common, but it doesn’t have to be like that. This is what we did for them. First, we spent two days coming up with over 80 ideas for their online products, making sure they were aligned to business goals.“

“Since that was too many to invest in, we went down to the local mall and set up an innovation lab. Right there with real people. It was all very lightweight and before the end of the week we whittled the list down to 5 winners.”

Now the young man almost looked hopeful. “Who did you hire to do the work?”

Spluttering on her beer in shock, Natalie replies, “Heck, we don’t hand off great ideas. We do them. Ideas to action! In just a few weeks we had it all on the site in front of customers.”

He grins, “Show me how.” Natalie pulls out her iPad and walks him through a diagram of the engagement. 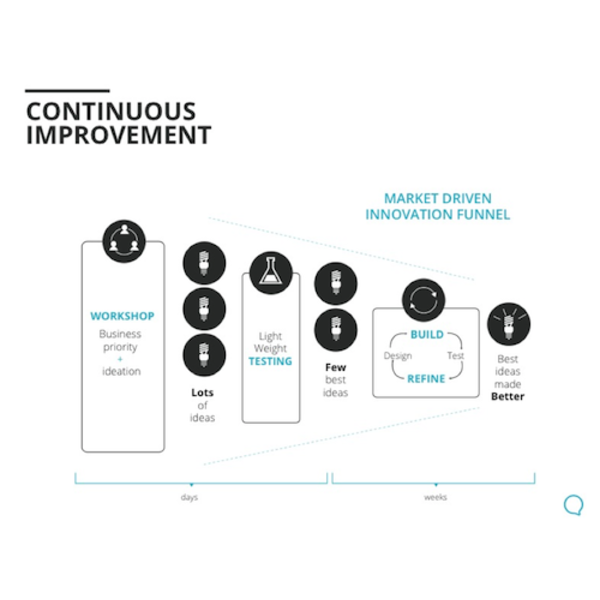 The next day, the bartender is stunned. “My uncle was thrilled at the change in his son. Run faster and be smarter! It’s like you transformed him. His brother though, the one with the dazed look on his face, he’s a tougher case. If you can get through to him, I’ll move you into the room facing the garden out back.”

No street noise at 2am sounded good, but as she walks up to the next brother he just stares off into the distance and says glumly, “The future is an unknown product of the unknowable.”

“Get a lot of dates with that line?” she asks jokingly.

“No” he said sadly, “mostly I sit alone and scribble ideas on napkins.”

“You have a bad case of new product paralysis. But there’s hope my friend! Our clients at Amplify had big dreams like you. They wanted to transform childhood education. But of course real disruption is not a journey that you can plan out in advance.”

“We helped them think big, start small and learn quickly. Our first Minimum Viable Product (MVP) was in the classroom in a few months. Then we built, tested, learned and pivoted every day.”

“We made it our job to mine opportunity from uncertainty. The secret was bringing researchers, strategists, designers and software gurus together in one team. It’s a powerful creative engine that won a design award and even got the product featured in the New York Times Sunday magazine on educational innovation.”

Natalie shows him the approach. As he smiles, Natalie knows she’ll be waking up to the sound of birds chirping. 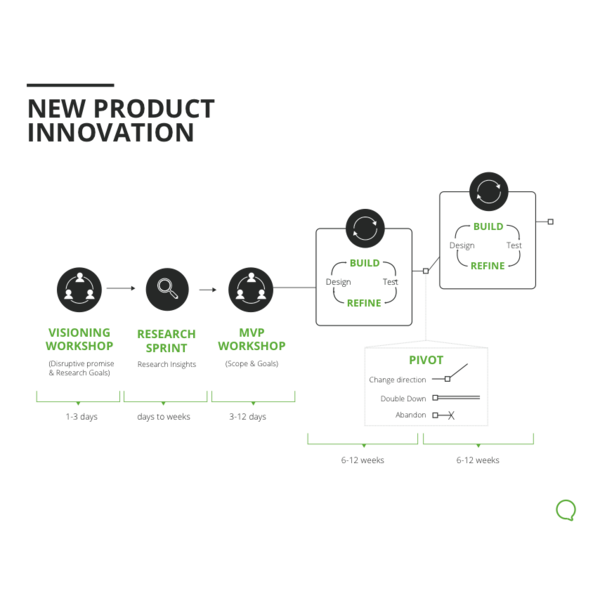 The third day was the toughest. The bartender laughs, “if you get that crusty old curmudgeon to smile, then I’ll give that dog of yours steak for a week.”

The oldest brother was a mountain of a man who glared at her through narrowed eyes. “You want to help?” he said, “Fine, I’ve got twenty year old systems, a hundred disconnected projects, and a business that’s going bankrupt in five years.”

Nat steadily meets his gaze and thinks of her dog, Winston. Winston loves steak. “You need to make your size an advantage again. For years being big was a plus in the marketplace. Now in the age of innovation, you need to turn complexity and scale into creative assets.”

“This is what we did with Natural Markets. These were people with ambitious missions who were starting a mixed collection of stores and taking on the eight hundred pound gorilla of organic grocers in America, Whole Foods.”

“They needed big. They needed intricate. We helped them create an entire ecology that broke the industry mold, knitting together back end systems, dealing with existing technical debt, and interconnecting new innovations.”

“Oh, Yeah,” the big man scoffed, oozing skepticism, “and how long did that take?” 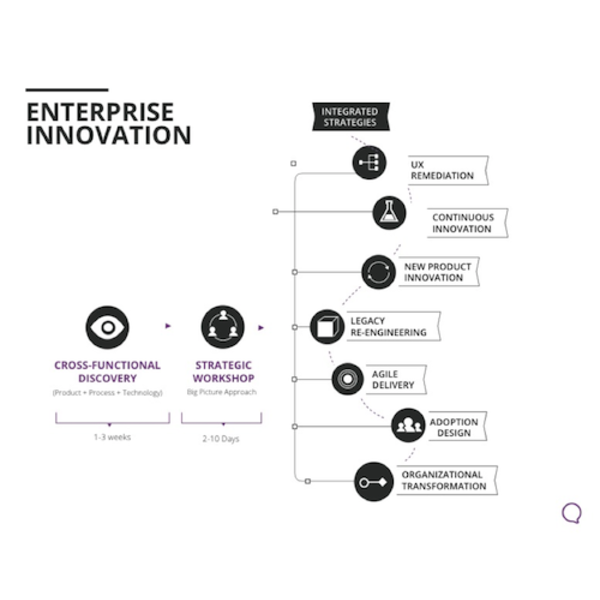 As she explained the diverse capabilities that drove innovation at scale, Natalie mused that the big guy was much less intimidating when he smiled.

That night, as she fed chunks of steak to Winston, she contemplated the joys of being a partner to business innovators. You drink better, you sleep better… and your dog is happier. 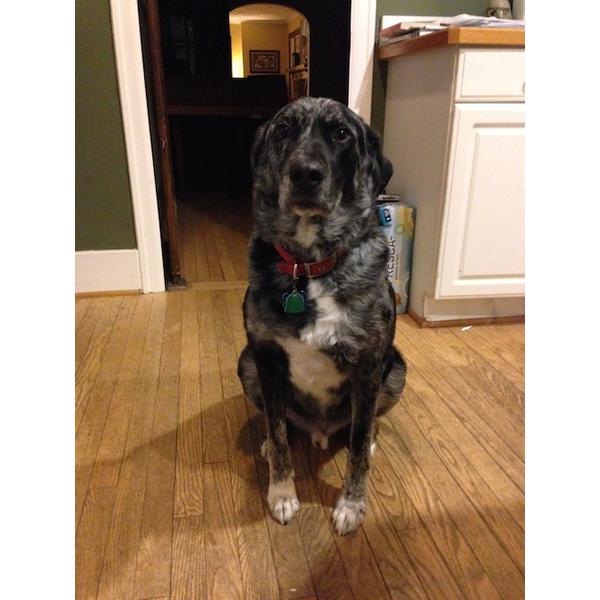